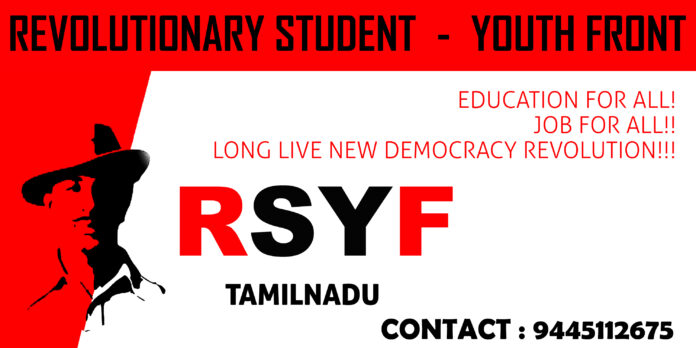 1) The people of Tamilnadu have been continuously to oppose the Neet exam for medical college. the justice a k Rajan committee set up by government of Tamilnadu to study the impact of Neet has submitted its report. that report should be presented to the people. the Tamilnadu government should pass a law against the Neet exam. covery issue, 7 Tamil peoples release issue, and need will be banned,as the union government crackdown on Tamilnadu continuously. student youth and democratic must work together to hold a relentless struggle untill the Neet exam is will ban.

2) Social Justice, reservation are refused in higher education of I.T and I.I.M institution controlled by Modi government. where the torture of backward and minority students was becoming a tent .Must appoint professor on the basis of reservation. And Take appropriate action against professor who follow a caste , religious discrimination.

3) Many government school/ college in Tamilnadu did not have adequate toilet facility, water facility and the classrooms due to Corona lockdown. So The Govt should immediately improve infrastructure of a school/ college and should appoint the Teachers based on student’s strength.

4)The number of dropout student and child labour has increased during corona period. The education of women has been affected and increased child marriage in Tamilnadu. so, Tamilnadu Government will research into those matter (problems) and Provide special scholarship to dropout students. The government should ensure that basic education to students of government.

5)The Government of Kerala is implementing paid salary with leave during menstruation period to all school college staff and teachers. the Tamilnadu should implement this matter napkin should be provided free to all female students after opening of college school. The government should ensure that napkin burning machine is available in all college.

6) The right of form of student associations is a fundamental right provided by Indian constitution, but the basic democratic right has continued to be denied to student in college and university of Tamil Nadu . college students need a representative for them to solve the problems. So the college university should conduct election after opening of college . over RSYF organisation request that Student Organisation must together to achieve these democratic rights.

7) the sale of drungs, kanja, Gutka , should be prohibited and these degrade of student’s mind. TASMARK should be closed , because that is ruining people’s livelihood. Internet games such as free fire etc, are blurring the thinking of students mind and dived them from social responsiblity. All students and democratic organisations must protest together to ban these online games.

8) The People’s power organisation has announced a blockade of Trichy railway station on August 15th. Under the Slogan, ” Full Independence to Ambani , Athani’s plunder., Prison oppression for those who oppose it “

The government enforcing laws that require corporates to plunder, such as the Agriculture Amendment Act, the Electricity Amendment Act, the Environmental Amendment Act, the Abolition of Labor Welfare Acts, and the Marine Fisheries Act. It robs The lives of people especially farmers, workers, fishermen and tribal people.
The fascist Modi government’s onslaught on students and youth continues, with privatization of government departments, non-filling of government vacancies, new education policy, NEET, reservation for the upper castes, non-payment of scholarships to SC, ST and students, and imposition of saffron in education.

represses black laws such as UAPA, 124A, against intellectuals, professors, social activists, and people who fight for their rights.
Pegasus Spyware spies on his own people through a spy processor, and arrests and imprisons Jamia Millia, JNU, and Aligarh University students who fought against the CAA, NRC, and threatens the student class at the forefront of the struggle for democracy with corporate-saffron fascism. Our RSYF wants the students and youth to participate and succeed in the siege struggle of the People’s Power Organization.

Dear students and democratic forces!
Please forward the above seen resolutions and spread widely.
With regards,