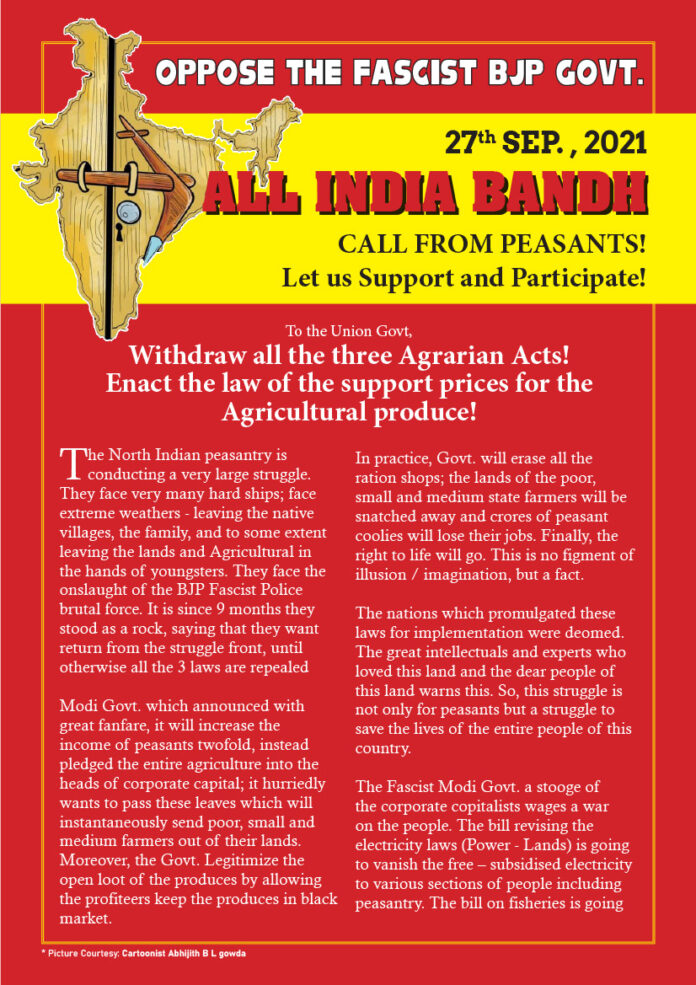 Let us participate in each and every form of struggle to make “All India Bandh” on sep.27 and make it “Grand Success”

The North Indian peasantry is conducting a very large struggle. They face very many hard ships; face extreme weathers – leaving the native villages, the family, and to some extent leaving the lands and Agricultural in the hands of youngsters. They face the onslaught of the BJP Fascist Police brutal force. It is since 9 months they stood as a rock, saying that they want return from the struggle front, until otherwise all the 3 laws are repealed

Modi Govt. which announced with great fanfare, it will increase the income of peasants twofold, instead pledged the entire agriculture into the heads of corporate capital; it hurriedly wants to pass these leaves which will instantaneously send poor, small and medium farmers out of their lands. Moreover, the Govt. Legitimize the open loot of the produces by allowing the profiteers keep the produces in black market.

In practice, Govt. will erase all the ration shops; the lands of the poor, small and medium state farmers will be snatched away and crores of peasant coolies will lose their jobs. Finally, the right to life will go. This is no figment of illusion / imagination, but a fact.

The nations which promulgated these laws for implementation were deomed. The great intellectuals and experts who loved this land and the dear people of this land warns this. So, this struggle is not only for peasants but a struggle to save the lives of the entire people of this country.

The Fascist Modi Govt. a stooge of the corporate copitalists wages a war on the people. The bill revising the electricity laws (Power – Lands) is going to vanish the free – subsidised electricity to various sections of people including peasantry. The bill on fisheries is going to drive out the fisher folks from their sea. The legal rights of nearly 40 crore workers are to be taken away and turn them into daily workmen and permanent slaves, by introduction and practice of new labours codes. The important and secularly things like extortitanly priced petrol, diesel and cooking gas prices; unemployment torture, price – rise, income disparities all put together is driving nearly 1.6 lakh people everyday to pushing and dump them ‘below the poverty line’, as the economic experts proclaim.

At the same time, the profits and properties of a few wise in gigantic portions. They are given eater wise in tax rebates more than say, five lakh crore rupees, at concession; Modi regme throws off the public sector properties to corporate capitalists at throwaway prices, all in the name of monetization plan.

Through demonetization and GST measures Modi Govt destroyed the entire network of small traders, small and medium industries and thereby destroys the entire economy. Amidst the highly critical year of corona period, this Govt. threw the entire migrant labours on streets and this entire world looked at it as a great disaster.
On the other hand, the government cover these anti-people policies by beasting the conversion of India into a superpower, after bogging the Pak-China issues as threats to Indian security and sovereignty; Raising the non issue of cow slaughtering and taking at the issue of sacred cow protection; pushing the ‘Ram temple’ construction as an achievement and pulling CAA laws into extreme religious fanaticism encouraging the rowdy sections of hindutva to wage a series of violent attacks on Muslims and other minority religious groups.

The Modi Govt. plays fanatic schemes within different caste – groups to unfold fanatic attacks Dalits. And by all these means of creating caste contradictions it tries to retain the power.

The slogans Allahu Akbar and Harahara Mahadev and the political slogan “down with Modi Govt.” are getting higher and higher and sharper into focus.

Let us participate in each and every form of struggle to make the All India Bandh on Sep. 27 with huge mass
and make it a “Grand Success”